What can Australia learn from the public service revolution taking hold in Europe?

There's a public service revolution building momentum in Europe, but what does a #HumanLearningSystems approach look like in Australia? @sarahhurc explores.

Relationships, learning and collective work. 3 ingredients that are vital to re-orient the public service towards the complexities of the real world, says @sarahhurc

Interested to hear from @sarahhurc and others about how you can join the public service revolution? Book your place at our upcoming webinar on 29 July. #HumanLearningSystems

And what does this mean for us working in and around government?

The first two questions are posed by Olli-Pekka Heinonen, Director General of the International Baccalaureate, previously Director General of the Finnish National Agency for Education in his introduction to the new e-book Human Learning Systems: Public Service for the Real World from the Centre for Public Impact and a range of partner organisations.

The third question is one we are interested in discussing as we explore the application of this new research here in Australia later this month. The e-book proposes that a public service revolution, known as Human Learning Systems (HLS), is already under way. In contrast to the current paradigm of New Public Management, at the heart of HLS sits a set of foundational beliefs and practices that seek to enable public service to better support human freedom and flourishing.

This new research brings together theory and thinking from a diverse group of academics, community organisers and public management thinkers combined with emerging learnings from practitioners working across roughly 50 projects from across the UK and Europe.

The three key components of this emerging paradigm are:

My own recent unlearning

A lot of the content and examples in the new report resonate with me, a seasoned public servant of over 16 years. I’ve worked at the heart of some of the most prestigious public sector organisations, NFP service providers, philanthropic foundations and consultancies in the UK and Australia. I’ve spent a significant amount of my career advising Ministers and politicians from across the political spectrum and C-Suite teams on innovative public sector approaches seeking to improve outcomes for people and health and human service systems.

"...we’ve not made any significant inroads on better outcomes for the people we were attempting to support despite the Theories of Change we produced".

However in both countries we’ve not made any significant inroads on better outcomes for the people we were attempting to support despite the Theories of Change we produced, the outcomes frameworks we carefully co-designed together with service providers and service users, the carefully negotiated KPIs and unit costs we built into contracts and the gold standard evaluations we commissioned from world-class evaluators.

I recently had the honour of being part of an innovative team, Commissioning NSW, inside NSW Treasury which combined human centred designers, economists, systems thinkers and social impact experts. We advised but also learnt alongside forward thinking policy makers and commissioners who were keen to do things differently. Unfortunately, as part of NSW Treasury reprioritisation towards post-COVID-19 recovery, the team was decommissioned in April 2021.

A large amount of the work Commissioning NSW did was focused on supporting cross-government groups to lean into and make sense of complexity when making funding decisions about services and the system which sat around them. Through this work I got to work alongside many front-line service delivery staff and with Aboriginal leaders and peers who are already using some of the approaches we need to re-orient the public service towards the complexities of the real world. Much of my learning set out below I owe to them.

Lesson one: Relationships are the work

Systemically developing and building trusted relationships is very different from crossing fingers and hoping for the best. It requires conscious effort and isn’t always comfortable.

Taking a HLS approach requires listening to what comes forth from community and partners including anger, trauma, disappointment and outright scepticism. Sitting in this is uncomfortable but important work to do as a public service leader. The messiness of relationship building, of negotiation, of learning together and of being open when things aren’t working is actually the work of public service – it’s not the thing that gets in the way of our ‘real’ work.

Building trust often means going slower than you may want. To create the space where you can walk side by side with others. This requires bravery on behalf of public servants – to be able to push back on unrealistic timeframes set by more senior decision makers or Ministers who are removed from the complex reality of public service. There are brave colleagues doing this already across the public sector – many of them are Aboriginal leaders who know there is no other way.

"Building trust often means going slower than you may want. To create the space where you can walk side by side with others".

A moment towards the end of my time at NSW Treasury reaffirmed for me the benefits of adopting different processes to help build relationships within the public sector itself. Our team had just finished facilitating a series of workshops with senior stakeholders in a complex and fraught policy space where strong divisions were evident and where we’d tried a couple of novel group exercises with them. One of the participants who had been initially sceptical of the workshops value said to me – “it’s not just the content of the ideas your team helped us come up with that is valuable. The way your team facilitate means I’ve now got a better relationship with and understanding of my counterpart when we need to have negotiations about these difficult things in the future”.

A lack of trustworthiness is a key complaint from many service providers and communities when it comes to government. People change roles, priorities shift, new rules get introduced and often without a clear articulation of why. As a counter to institutional short-term memory from government, some partners and community are beginning to seek an investment in mutual learning in the hope that government will listen more openly and think more deeply about the impact of these kinds of changes in the wider system.

In one particular project focused on developing a new way of commissioning services for Aboriginal communities that supported self-determination, it became clear that partners were not only going to need to learn what works in terms of service delivery and culturally informed commissioning approaches, but also how does government learn to share power and devolve decision making to Aboriginal led organisations and communities themselves.

"...partners were not only going to need to learn what works in terms of service delivery and culturally informed commissioning approaches, but also how does government learn to share power and devolve decision making to Aboriginal led organisations and communities themselves".

The team realised that collectively working to answer this question would generate value beyond the particular service being designed so the funding agency sought to invest in a developmental evaluator role to work alongside the delivery team from the start. Unfortunately, this did not get final approval as it was felt that evaluation or learning should only be for measuring ‘impact’ after a service has been delivered. This was a missed opportunity which unfortunately reaffirmed a widely held perception that government isn’t really interested in listening and learning from community and partners.

Some of our work at Commissioning NSW included facilitating diverse groups with different perspectives to make sense of complexity from across systems. This often involved bringing groups of people together to make sense of emerging service issues or known challenges by gathering and examining a range of qualitative and quantitative data and collectively making sense of what it might be telling us about the system in focus. Only then would the group agree a focus for its work together, decide how to move forward and negotiate what role each party would take.

The most successful projects involved community members from the very early stages of the process. In a project focused on early years child wellbeing community members were able to question and challenge the assumptions being made by those analysing the quantitative data away from the messy reality of work on the ground. They could question and challenge the lack of key measures important to community in the outcomes data being used to make decisions and have been able to provide examples of where good local work is already happening unfunded by government that could be grown and invested in.

"The most successful projects involved community members from the very early stages of the process".

By taking on this facilitation role our team could help people across complex service systems have conversations they’d not had before despite the amount of time sat in meetings together over the years or the documents passed back and forth via email over the course of months.

As part of the upcoming HLS launch event, I’m looking forward to hearing from those involved in other Australian examples of this kind of approach. Learnings from the UK and Europe will have relevance in the Australian context as we’ve adopted many of the New Public Management concepts and methods here. However, we also have our own particular knowledges that we must be alive to when considering a Human Learning System approach here in Australia - particularly First Nations leaders’ and other community led work.

Their own stories and my own recent experiences of working with other public servants navigating complexity gives me hope that we have begun working towards a new paradigm in the public sector in Australia. 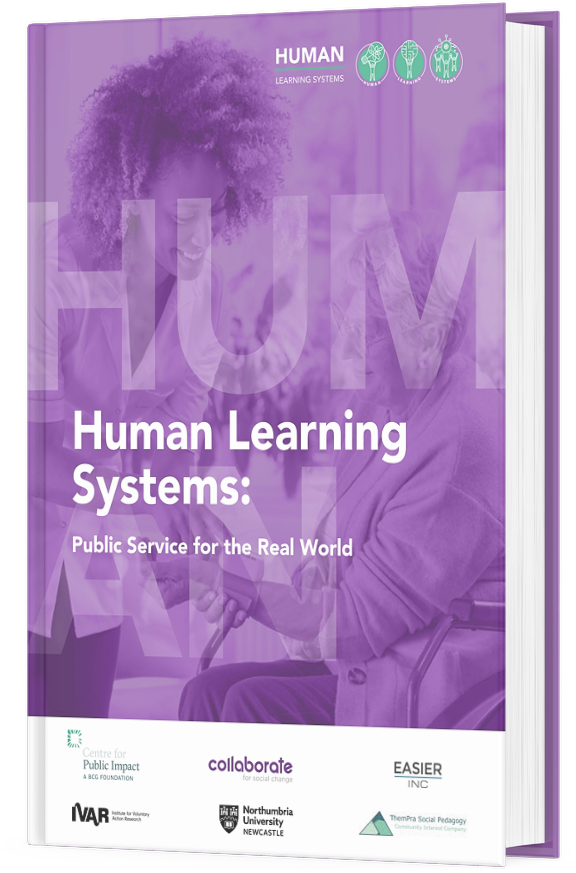 Learn how you can join the public service revolution

Hear from practitioners like Sarah at the Australian launch of Human Learning Systems: Public Service for the Real World on 29 July at 5pm AEDT, hosted by the Centre for Public Impact and Sydney Policy Lab.