What would it look like to use #humancentereddesign methodologies to bolster fraying civic relationships? @CPI_foundation's Saumya Shruti tested this to rebuild trust between local communities & governments

"When cities are able to tap into the existing relationships they have with their communities, they can work together to create solutions that make a difference." @CPI_foundation's Saumya Shruti on using human-centred design to rebuild trust

"People build relationships with people, not abstract institutions. At the center of trusting relationships is the recognition that they are sustained on the interpersonal level." How do you use human-centred design to bring humans back into government?

At the heart of CPI’s work is reimagining government so that it better serves the communities it represents. Throughout my time at CPI, I’ve worked to help bring this way of thinking to cities all across the world through innovation training programs. These programs support public servants in designing solutions to increasingly complex problems by working with their community through human-centered design, a process of creating policies and programs that center the needs of the community who will be impacted by them. Working on these projects gave me deep insight into the world of relationship building as a key component of effective public programs.

However, relationships between governments and communities have weakened in recent years – posing barriers to engagement and outreach in the human-centered design model. I found that our most successful cities focused on relationship building alongside program development to build community champions and dive into root causes. Recognizing this challenge in 21st-century governance, I wondered, "what would it look like to use human-centered design methodologies to bolster fraying civic relationships?”

In supporting our team in designing the Earned Legitimacy Learning Cohort (ELLC), a program that aimed to help bridge the gap between governments and communities by building trusting relationships, I tested the idea of using design to rebuild trust between local communities and governments. We learned that rebuilding this trust could produce ripple effects in the process of governing, leading to unexpectedly positive outcomes in other parts of the community. Ultimately, through this process, we saw that governing is a continuous state of relationship building that leads to a thriving community. 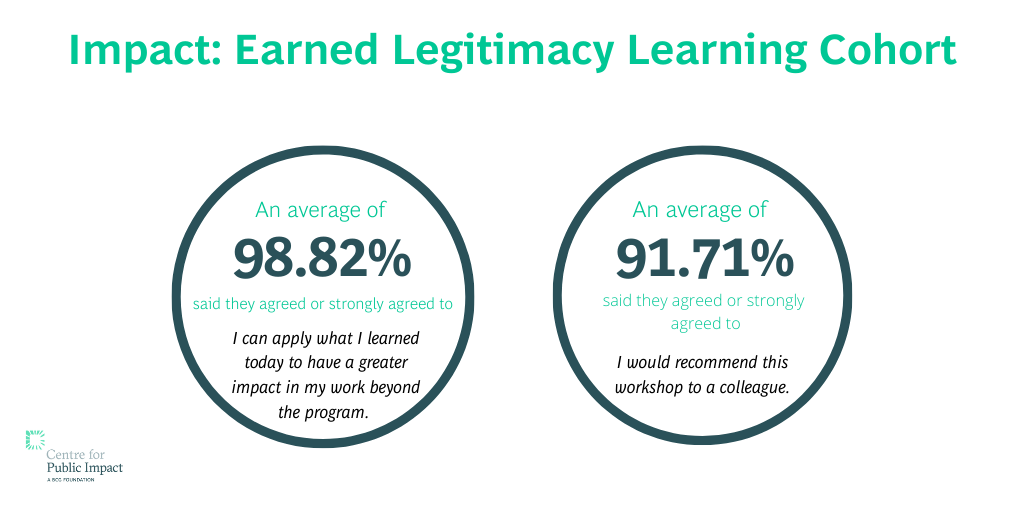 This process reaffirmed my belief that principles of human-centered design make the government better work for people. Moreover, by focusing these efforts specifically on rebuilding trust, we can make human-centered design more inclusive of all people and lay the foundation for a closer government-community relationship in the long term, which ultimately helps communities thrive.

Using human-centered design to bring humans back into government

At CPI, we’ve worked with Bloomberg Philanthropies and Bloomberg Center for Public Innovation at Johns Hopkins University to bring design training to cities around the world. Public servants have worked with their residents to deeply understand problems and begin implementing ideas that make a difference in their communities.

Innovation methodologies using human-centered design have had an impact on the cities I’ve worked with. When cities are able to tap into the existing relationships they have with their communities, they can work together to create solutions that make a difference. These relationships give access to community members that are able to share their perspectives on the problem at hand and let their lived expertise inform the outcome of the project.

Designing a program for designing trust

I wanted to explore this hypothesis more deeply – from understanding why these relationships are breaking down at the local level to thinking about how they could be developed in meaningful ways. Through the opportunity to design the Earned Legitimacy Learning Cohort, I was able to work alongside team members that were eager to do just that. As we began, we asked ourselves – “What is required for building trusting relationships?” and ultimately discovered that it is recognizing and acknowledging the impact of what both the government and the community is bringing into the relationship.

People build relationships with people, not abstract institutions. At the center of trusting relationships is the recognition that they are sustained on the interpersonal level. This means humanizing the government by empowering public servants to serve as representatives of the government while bringing their full selves into their role. It also means that they’ll bring their personal biases and assumptions to community relationships – ones that must be acknowledged openly to recognize the potential impact of these beliefs on the people they are trying to serve.

In order to understand and acknowledge these assumptions, we created a safe space where we asked both government officials and community members to openly share what they assumed about themselves and each other, and identify any harm that could be created by holding those beliefs. In doing this activity, we hoped our participants would recognize how their everyday beliefs could hinder them from having open conversations with other community members.

After taking account of personal assumptions and beliefs, we saw that in any trust building endeavor, those in power would ask “Why are there strained relationships with governments and communities?” Researching this question required digging deep into local history. While people with lived expertise could shed invaluable light on the problem, we didn’t want to send our participants representing the government into conversations that could retraumatize community members. Not knowing key historical events that critically impacted a community’s thriving could be interpreted as another way that governments lack care for these communities, particularly when said historical events were caused by the government. Relationship building with the community requires those in power to come prepared – equipped with a deep understanding of the histories and systems that have caused harm. It would require a demonstrated commitment to empathy.

To support our participants preparing for listening conversations with communities, we created program modules around historical analysis and systems mapping. Historical analysis pushed our participants to explore past events that have led to the status quo, examining demographic trends, governing structures, key figures, and other local historical details. Systems mapping, a tool to help visualize the connections within a system, helped clarify how various historical events, actors, policy areas, and actions interacted with and were influenced by each other to create today’s state of affairs. This upfront research was developed to prepare more meaningful and empathetic community member interviews, contextualizing their stories within the complex reality of eroding trust in government. 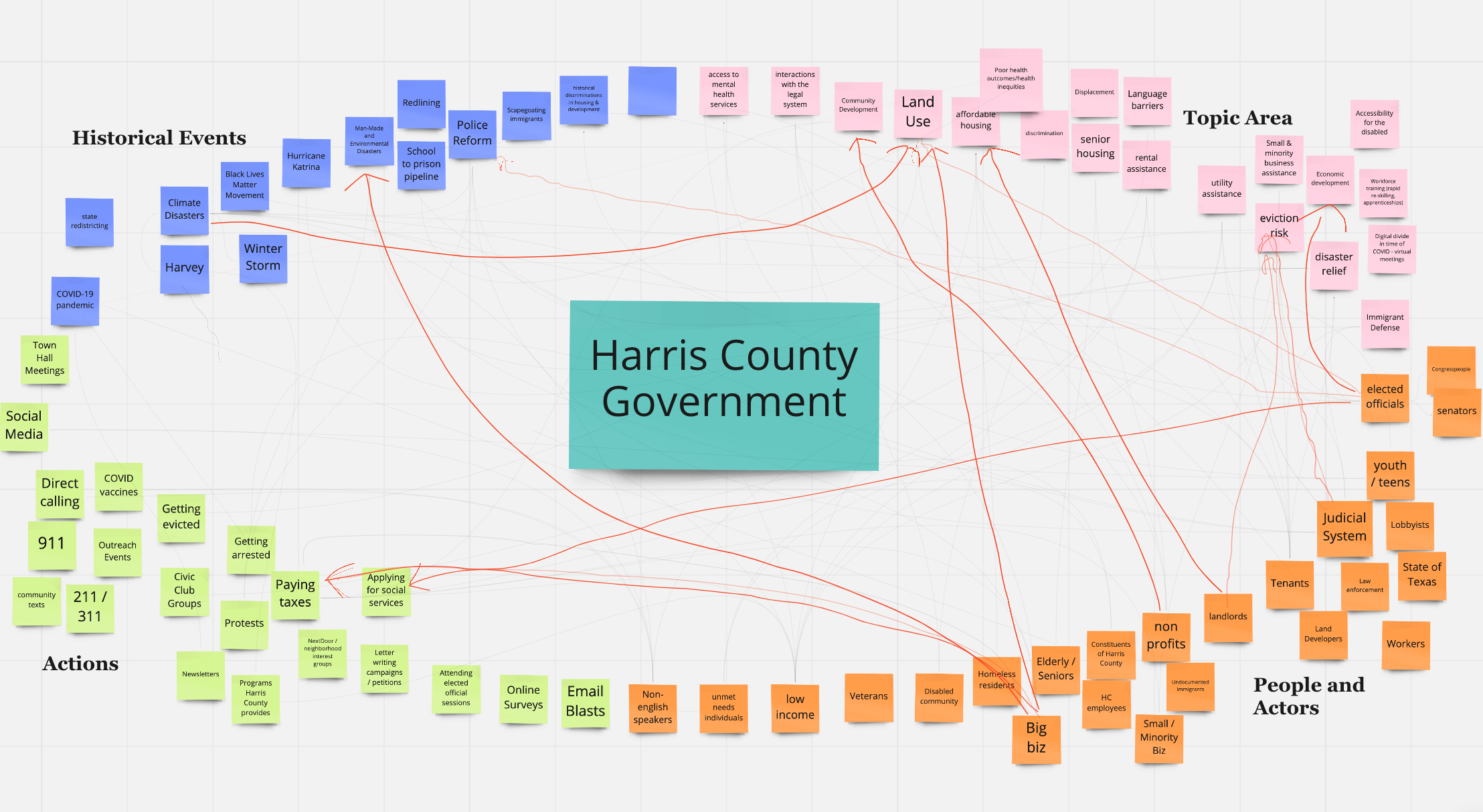 Systems Map example from the Harris County, TX team. The team used this tool to visualize the different actors and actions that impacted community trust.

“Seeing the Community” didn’t only require care during the research portion of the design process, but also during ideation and co-design. Human-centered design often focuses on developing new solutions to existing problems, but building trusting relationships requires empowering the work that is already being done by the community. We created a module that identified community assets – anything or anyone in a community that improves the quality of life. Parallel to creating new solutions, identifying the people, places, and organizations that were already doing this work ensured both that community members were getting a say in coming up with new ideas and that current successful ideas were getting amplified. Community asset mapping also helped track “new ideas” generated with initiatives that, in fact, already existed. The suggestion of these already existing “new ideas” could serve as an indicator for the community’s support of that work. The indicators collected through asset mapping could be used to inform future budgets or legislation at the government level to be more aware of and informed by the community.

Trust building in the long term

The aforementioned efforts are not the be-all-end-all of trust-building efforts by local governments. Rather, these tools serve to help those pursuing trust building with methods to keep humility and share power at the center of mind. Even as they help increase community interaction, this process alone will not lead to trust. But make no mistake - it is still vital. Engagement at every step of designing solutions enables community members to feel invested in the outcome. While the outputs of the design process (policies, programs, engagement opportunities, etc.) can contribute to success, what this process of trust building shows is that it is ongoing and takes time. It requires a long term organizational commitment to increasing government legitimacy by building trust.

While that seems obvious, what it looks like in practice requires leadership to have a deep commitment to bolstering relationships over short-term outcomes. In our program, we supported our teams by helping tell the story and importance of this work to inspire senior leaders to stay invested.

We were only able to connect with a few groups of residents, but this process inspired public servants to look to their community as a partner in governing. It also revealed that for many, the government can still be a beacon of hope, even if they personally have been burned in the past. But relationship building requires the government to be open about past harms, look to do right by their community, and commit to the community’s needs. It requires constant interaction and collaboration with the community, empowering residents to be just as involved as the government is. Similarly, it requires the government to recognize and share power with those that are already invested in creating thriving communities.

While the outputs of the design process (policies, programs, engagement opportunities, etc.) can contribute to success, what this process of trust building shows is that it is ongoing and takes time.

These lessons are especially important in 2022. This year, governments across the United States will turn their community engagement efforts to voting, where the community engagement culminates when the ballot is cast. This action is obviously key in determining who’s at the helm of local government, however, there is a strong temptation to then neglect the community until the next election. With changing administrations and the fervor to deliver new agendas, the community voice can be drowned in the noise of political priorities. Yet the general populace is now more than ever deeply aware of when governments aren’t able to serve community needs. This means that not taking the time to build community relationships is ever more harmful, even as governments are trying to do good by the community. There is always a utility to trust.

Governments should therefore fight hard against this temptation to neglect community engagement between elections. They should continue to interrogate where there are weaker relationships between government and community, why those exist, and work to strengthen these relationships over the course of many years. Relationship building can lead to collaborative governance, where communities work together to support each others’ thriving. This work isn’t just to create better government policies or programs - it’s to reimagine community and government culture towards creating conditions of care for all. My work in bringing human-centered design to community building showed that this was possible, and instilled in me a deep sense of hope for creating a better future.

Running programs that bring human-centered design to City Hall and creating programs to help increase legitimacy in communities has been an eye opening one. With so many public servants dedicated to improving the lives of their community members, it's clear that the passion for reimagining government is there. It just requires remembering that at the core of governing is human relationships that require nurture and care for trust.

Are you interested in reading more about the progress and developments of the Earned Legitimacy Learning Cohort? 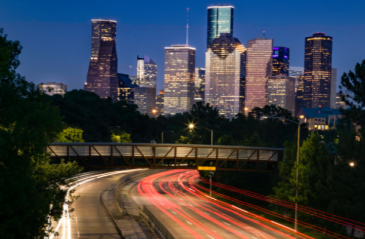 Hope of Co-Creating in Harris County