Picking the policy that will have the greatest impact

It came as no surprise to me that policy has been found to be a critical ingredient in public impact.

It reminded me of how Tony Blair was very clear about his policy priorities when he set up the delivery unit in Number 10. Sitting in the sunshine outside the Cabinet Room, he crossed out numerous suggestions on my selected list of goals or targets, leaving just a few to remain. "I want the delivery unit focused on issues of real salience… for example, in transport I only want Michael to sort out the railways," he explained.

His laser-like focus can be traced not only to the perspectives and comments of the voters - he was fresh from the campaign trail - but also the memories of his first term as prime minster, when he often found himself frustrated by the pace and complexity of public sector reform. As he settled into his second term in office, Blair - like any recently elected leader - was faced with the challenge of turning his policy ideas into a practical programme for government. So, how do you do it?

An agenda of clear objectives and ambition

Blair was quite right in recognising the importance of setting the right objectives. Every successful leader - in both government and business - will tell you that unless an organisation is clear about its priorities it will struggle to succeed. Obviously there are differences between sectors public and private, however. A business can identify a focus area and sell off parts of the business that don't relate to it. Government, though, is very different. Under Blair, literacy and numeracy were priorities at primary level, but that didn't mean stopping teaching science or the arts, for example.

Setting the right priorities represents an important first step - next comes the job of deciding how far and quickly you want to go by balancing feasibility with ambition. Much depends on the context. Sometimes the times demand a period of radical transformation whereas in others a softly-softly approach will work best. Often, the debate between boldness and caution occurs between politicians on one hand - fully aware that voters are impatient for results - and career civil servants on the other, who have sent it all before and are more likely to look long-term. Striking the right balance between the two is critical.

On the face of it, evidence-based policymaking sounds like perfect common sense. After all, by gathering evidence on what works, governments can design policies that best fit the circumstances in which they are to be implemented.

However, I would inject a note of caution, simply because evidence relates to the past and recounts numerous failures - thereby impeding, rather than inspiring, today's generation of policymakers. Too often, it is used to justify delay and, by definition, the research is never complete and cannot tell you whether a new innovation will succeed or not. This doesn't mean, however, that evidence should be ignored. It should always be taken into account but not be seen as replacing wise judgement - which is what we elect politicians for.

No doubt this will be an ongoing debate. But if governments are to provide the services and regulation on which our prosperity as individuals and communities depends, we need less ideology and more sustained priorities and processes to enable the good ideas which exist in government to evolve into better outcomes for us all.

Learning from city leaders: Competing in a dynamic market ecosystem 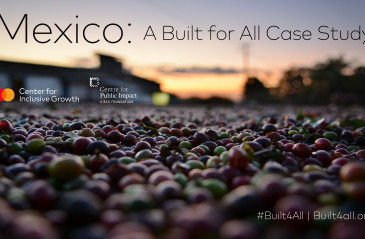 Built For All Case Study: Mexico