Learning from city leaders: building public infrastructure for all places and future generations

South Bend confronted a familiar problem: exclusionary development, and a cycle of mistrust. Find out how they're working to break the pattern and create a city #Built4all

Kansas City faced both a racial wealth gap and a political system unable to tackle it. Find out their elegant solution towards creating a city #Built4All

Pittsburgh sought to rebuild the Black communities that once populated the city and recreate a city #Built4all. Learn how

This piece is part of the #Built4All Listening series. Read our other pieces on digital and data and building dynamic local economies, and check out our comprehensive overview.

An inclusive economy will ensure that all places and future generations benefit from well-maintained public infrastructure. Implicit within this outcome of the Built for All framework is the reality that there has been a historic imbalance in where investments in infrastructure have been made. Just as our economy has left individual people behind, it has also left entire communities behind by failing to spread the benefits of economic growth. When it comes to government investments in infrastructure, the disparity is stark -not all places have benefited equally from development and public infrastructure.

“Infrastructure,” in this case, does not exclusively mean roads and bridges (though it undoubtedly includes them). It also encompasses city development, public transportation, and internet access. The legacies of underinvestment echo through all areas of infrastructure. Not only has there been underinvestment in physical infrastructure nationwide, but the investments that have been made are not reaching the communities most in need. Through transportation investments that have disregarded the needs of all beneficiaries or exclusionary zoning, development of our neighborhoods (or lack thereof) has not led to the flourishing of all people.

Cities and states are the main arenas where infrastructure decisions are made, and it is here that the problems of the past must be confronted and solved. Accordingly, many of the cities we interviewed as a part of the #Built4All Listening Series selected all places and future generations benefit from well-maintained public infrastructure as their outcome of focus for Pillar three: Collective stewardship of shared resources for future generations. 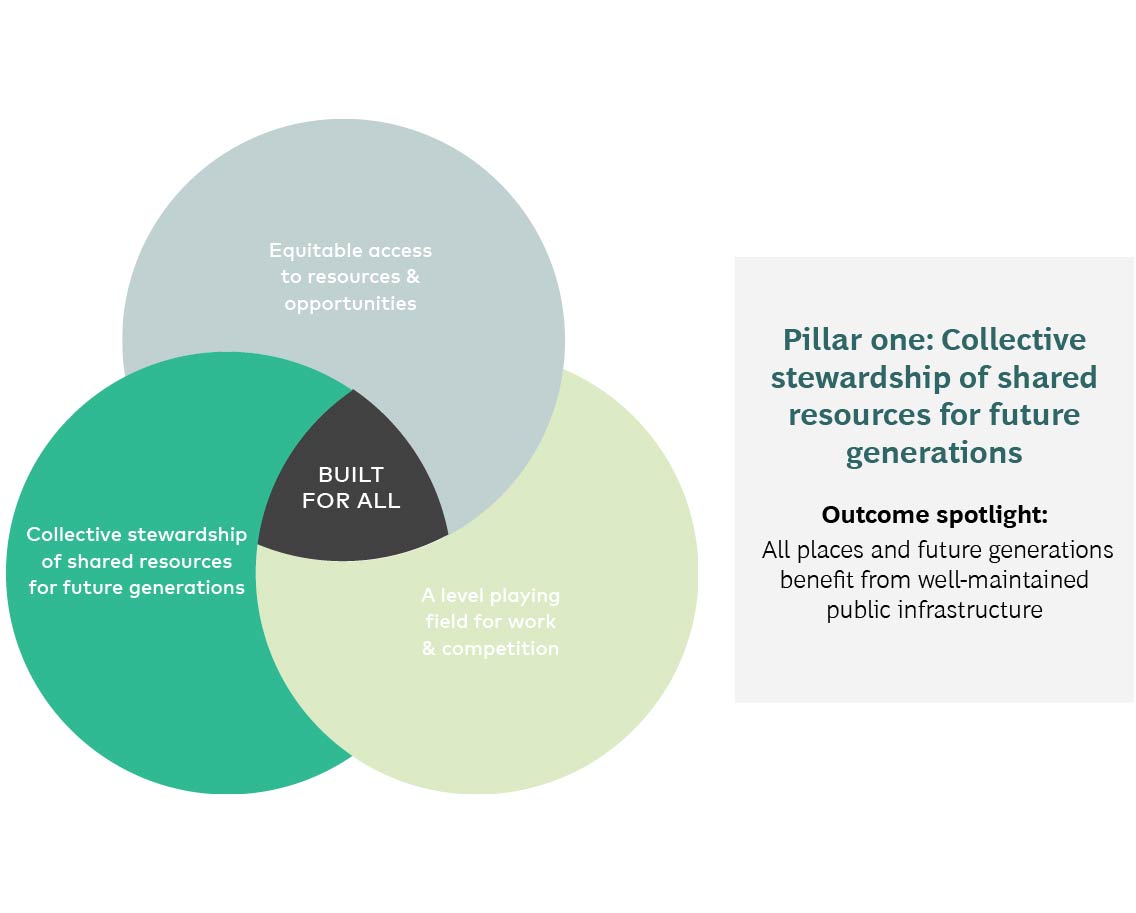 The lack of investment in infrastructure and opportunities, and its disparate impact on communities of color, is a problem nation-wide. Yet, each city faces unique challenges and there is no one-size-fits-all solution. There were common themes throughout the conversations we had with governments over their efforts to address this problem. Of these conversations, South Bend, Kansas City, and Pittsburgh had especially illuminating stories to tell, and the lessons learned there offer key insight and ideas for cities nationwide.

South Bend confronted an all-too-common problem faced by communities across America: exclusionary development compounded by long-standing mistrust and lack of communication between communities of color and the local government.

“Part of our role and duty in city government is to address market failures in poverty, racism, inequalities.” - Santi Garces, Executive Director for the Department of Community Investment

Exacerbating these problems are the issues characteristic of small Midwestern cities more generally: the job loss of their primarily manufacturing-based industry, a stagnant economy, lack of institutional capacity in philanthropy/non-profit space to tackle big problems, and a limited budget. Suburbanization was also a long-standing issue for the city to manage and one it aims to reverse, particularly given the racial underpinnings of the phenomenon.

Cross-cutting all of these problems, South Bend recognized historical issues of equity. Thus, in their solutions they prioritized connecting with and fostering the economic potential in communities of color.

Faced with the disconnect between the local government and communities of color, South Bend sought to expand its development plans to include inclusive development through education and outreach. The Office of Diversity and Inclusion aims to reboot and identify what small businesses of color need by:

Across all efforts, the city is mindful of existing mistrust. Honesty has become a key focus in all engagements with the communities: officials are honest about what the government can and cannot do. Likewise, South Bend recognizes that lack of trust means that communities may be suspicious of government efforts, so they are dedicated to working with residents to co-create solutions to problems.

“Residents will not have a conversation with us if they do not trust us.” - Alkeyna Aldridge, Director of Engagement & Economic Empowerment

South Bend’s efforts to bridge the gap between the needs of historically marginalized communities and the local government’s resources demonstrate that straightforward efforts can have a major impact down the line.

Kansas City faced similar problems in supporting Black and Brown communities, but first had to overcome an additional hurdle: a debate over how to even define the racial disparity, let alone agreement on how to confront it. According to LaDonna Gooden, a FUSE Corp Fellow, “Currently, equity and inclusion conversations feel disjointed and have yet to truly incorporate the values of equity and inclusion.” Public servants and their partners repeatedly ran into a lack of understanding, and a lack of motivation, to deal with racial disparities from existing power structures. Everyone seemed to be using their own definition of economic inclusion, and without a common understanding, progress was stymied.

How could a city invest in historically under-invested communities when there were so many who were unable to agree on the shape or the nature of the problem? Even moving beyond this immediate issue, Kansas City would then have to confront the same challenges that faced other efforts to create a more inclusive economy. What form would this investment take? How could they ensure this investment would be both sustainable and actionable? What would be the most effective method to close the racial wealth gap?

The solution was as elegant as it was bold: rather than continue to struggle against a system that seemingly had no incentive to listen, Kansas City decided to take its case directly to the voters.

“This was a bottom-up approach, a community driven effort.” - Nia Richardson, Assistant to the Director for Small Business and Entrepreneurship

The Sales Tax District - Ordinance No. 160861 was put before voters to enact an economic development sales tax. Funds raised from this tax would be devoted to projects located within the area identified as a historically neglected minority community. Supported by organizations such as The Urban Summit, Freedom Incorporated and The Southern Christian Leadership Conference of Greater Kansas City (SCLC-GKC), the backers of the project took their case to the people. In 2017, voters of Kansas City approved the tax:

Through this work, Kansas City will drive investment of $8-10 million annually over 10 years.

“This is the closest thing we can do towards reparations for the Kansas City [MO] Black community”- Nia Richardson, Assistant to the Director for Small Business and Entrepreneurship

Their approach is a strong example of a creative solution to investing in people, neighborhoods, and infrastructure that have seen historic disinvestment due to segregation, redlining, and other measures of economic exclusion on the basis of race.

After generations of Black residents leaving the city to build better lives elsewhere, Pittsburgh has grappled with a problem of attracting Black populations and rebuilding strong communities. Led by Mayor Bill Peduto, who firmly believes that inclusion helps all people flourish, the City of Pittsburgh sought to both reverse the trend of Black residents leaving the city and re-establish the city as a Black hub.

“Any inequality is bad for business in the long term.” - Majestic Lane, Chief Equity Officer & Deputy Chief of Staff

As Pittsburgh’s city government began the process of determining how best to do this, they confronted a series of very familiar questions: Who has the power and voice to determine what economic development looks like? How can city governments be innovative with economic inclusion?

The answer began with listening directly to residents to collaboratively create a solution known as Avenues of Hope. A mayoral initiative to deepen investment in traditional Black main streets and neighborhoods surrounding them, Avenues of Hope sought to nurture the sense of community and home in Black and Brown communities. More specifically, it aimed at restoring previous “crown jewels” of Black neighborhoods that had fallen into disrepair, such as Chartiers Avenue/Sheraden, Perrysville Avenue, Homewood Avenue, Warrington Avenue, and the Givner Building.

“How can we ensure a reality where a Black child from Atlanta comes to Pittsburgh and tells you he likes it.” - Marty LaMar, Chief Economic Development Officer

This initiative focuses on seven major business corridors, with the goal of investing in existing small businesses and residents and supporting the inclusive growth of the neighborhoods. These Avenues of Hope will be reinvigorated by:

Build inclusive economies in your community

During COVID-19, in particular, many local governments realized the impacts of underinvesting in quality infrastructure, disinvestment in Black and Brown neighborhoods, and exclusion in city development. Without supporting all residents, cities cannot be strong or resilient.

The Centre for Public Impact is committed to working with governments and their allies to build healthier local economies. Join CPI to embed equity into public infrastructure and build an inclusive future marked by human and environmental flourishing. 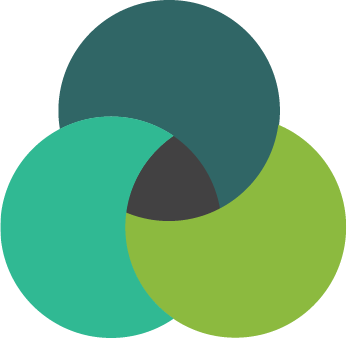 The #Built4All Listening Series: Learning from City Leaders features lessons from thirty interviews with fifteen local governments across the U.S. and is part of an ongoing effort aimed at building truly inclusive economies that prioritize the flourishing of all people and the planet. Visit built4all.org to learn about the #Built4All framework, read related content, view upcoming events, and connect with our team.