Eyes on the prize: Inside the Western Cape government's delivery unit

Real-time data, measurable indicators and regular six-weekly stocktakes are all being used

The Western Cape on the southern tip of South Africa is famous for many things. Cape Town and Table Mountain spring to mind, as does its reputation as the gateway to the African continent. And it has long been a top tourist destination - with its beautiful wine farms and the garden route just up the coast.

Now, though, it is gaining a reputation for something quite different - the Western Cape government's Delivery Support Unit (DSU). It was developed under the aegis of Sir Michael Barber, known for developing the results-focused ‘science of delivery' in Tony Blair's government of 2001-2005. Belinda Wood, a manager at the DSU, explains that there is much in common between the two administrations.

“Both units were launched at the start of a second term in office,” she points out. “In our case in the Western Cape, it happened after Helen Zille's re-election as premier in 2014. She was clear that she wanted the provincial government to focus on delivering some high-level priorities and, at the same time, had come across the work of Sir Michael. The methodology and approach he established in Blair's government had really spoken to her, so she made contact with him and at the same time set up the DSU. That was about 15 months ago.”

The work of the DSU is underpinned and driven by six priority areas, christened ‘game changers', covering energy security, technical and vocational skills, after school, e-learning, alcohol harms reduction, and an innovative, mixed-use development to integrate communities. The ambition is to deliver impactful results faster and to create opportunities that will improve citizens' lives by the conclusion of the premier's current term of office in 2019.

The DSU has a specific role to play when it comes to ensuring the success of the game changers, by providing oversight and strategic support to provincial departments. Mirroring the approach of governments elsewhere, such as Punjab in Pakistan and Maryland in the US, Wood and her colleagues place a high value on data and metrics.

With the support of leading policymakers, the DSU, in conjunction with delivery teams in individual departments, is focusing on delivering results and outcomes via detailed performance tracking. They use tools such as real-time data and measurable indicators in their regular six-weekly stocktakes that take place in front of Premier Zille and other senior colleagues.

At least that's the theory. How have they actually been getting on?

Wood says that although they are still a young unit - “we only got up to full capacity in August last year” - progress has been swift, thanks to the strong backing the DSU continues to have from Premier Zille. “She is behind us 100%,” says Wood. “The stocktakes are sacred in the premier's diary and don't get moved for anything.”

Wood also cites the positive impact of the game changers, revealing that their establishment has already promoted positive behavioural change within provincial departments. “In governments, people have very good intentions but they can get quite bogged down in procedure,” she says. “And in South Africa at least, compliance has often taken centre stage, which means making sure you receive a clean financial audit rather than prioritising delivering services to citizens. But our game changers are focused on delivering results and making an impact on the lives of citizens - and officials are increasingly recognising that.”

And the stocktakes, too, have proved a powerful tool in establishing the DSU and also in promoting greater transparency. “The stocktake methodology means that the premier and relevant provincial ministers know what's going on at all times,” she explains. “We quickly got into the routine of having these stocktakes because they keep the leading policymakers briefed and the departments moving in the right direction. They know that they will be sitting in front of the premier in six weeks and will have to account for failing to meet deadlines or targets that have been set.”

And as a result, the heads of provincial departments have started recognising the value of the DSU and the role it plays. “As in many other governments, when you try to introduce change and a new way of doing things, you are often met with resistance. The DSU has encountered this problem over the past year or so,” concedes Wood. “But now the heads of department are starting to see how our work can assist them in achieving their departments' internal objectives.”

Wood, who prior taking up her role at the DSU had worked in the policy unit of the provincial government and had taken a Master's in Development at university in Belgium, goes on to say that she and her colleagues work closely with colleagues in other governments, including the City of Cape Town just down the road.

“They don't have a delivery unit in the traditional sense, but instead have a strategic policy unit that also seeks to push things through the system,” she says. “Certainly, the scale of some of the issues we are working on means that they are not going to be solved by our government alone. This is why we have partnered with the City on a number of our game changers. For example, the Energy Security and After School game changers are being rolled out jointly by the Western Cape Government and the City of Cape Town. We recognise that the provincial government competencies are limited in some areas, and so we need to work together with all spheres of government to achieve the desired impact.

“However, that doesn't mean that our provincial government is unable to make real progress on its own. A number of our game changers have been chosen because they fall within our remit,” she points out. “For example, it's the mandate of the province to run education - so that's why we have an education-focused game changer, namely implementing e-learning to schools across the province.”

There seems little doubt that the DSU team is fully focused on their immediate priorities for the next few years. “The countdown to 2019 - the conclusion of Premier Zille's term in office - is top of our list. We've just come out of a very intensive planning phase and we now know what our goals, outcomes and indicators are, as well as the levers we will use to get there,” she says. “We are moving from 80% planning to 80% implementation.”

And although the DSU has only been up and running for a relatively short period of time, Wood is already keen to share its knowledge and insights with others. “Overcoming the many barriers to delivery is not something that is exclusive to our provincial government,” she points out. “Africa has its own unique context with its own unique challenges, but also its own unique opportunities. We're already talking to other provincial governments about our experiences, as we want South Africa to be recognised as a centre for delivery in the continent.”

We are committed to achieving the goals set out under our game changers and are looking forward to working in partnership with other spheres of governments, the private sector and citizens to make this a reality. These partnerships are what underpins the Western Cape government's slogan: “Better Together”. 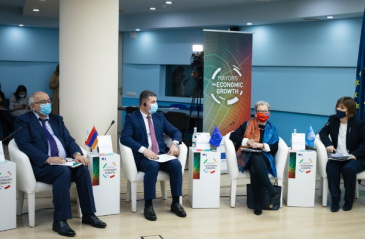