Learning with cities: co-designing with communities

.@CPI_foundation has partnered with @publicinno and @BHcityleaders to deliver innovation training to cities globally 🌎 Explore co-design in action in Chattanooga, Tempe, Medellín and other cities!

From Chattanooga in the United States to Medellín in Colombia, cities from around the world are successfully collaborating with their residents to develop ideas that could truly make a difference for communities.

From February 2022 to December 2022, the Centre for Public Impact (CPI) partnered with the Bloomberg Center for Public Innovation at Johns Hopkins University and the Bloomberg Harvard City Leadership Initiative to deliver innovation training to cities globally.

Civic innovation asks us to reconsider how we lead community engagement, moving away from informing and pitching ideas to truly co-designing solutions with communities. These solutions are often more impactful than those developed by the inform and pitch method, given that the people who are ultimately most impacted by the problems pen the solutions. In our innovation training program, we’ve seen this in action, watching dozens of cities from around the world successfully collaborate with their residents to develop thousands of ideas that could truly make a difference for communities.

Co-design is creative, collaborative, and dynamic. Successful co-design sessions ultimately come from the way cities design spaces for their residents to feel like true collaborators. Of course, this looks different in every city, but we’ve observed a few patterns of what cities do well in designing productive co-creation sessions that lead to deep partnership and trust building:

Cities in our programs work on problems that impact marginalized residents in their communities. Creating inclusive spaces means stepping out the walls of City Hall and meeting residents where they’re at. By going into the communities, city teams empower residents to feel comfortable in their own spaces and demonstrate prioritization of their residents’ needs. Not only does this effort lead to better co-design, but these sessions can also lead to stronger relationships between residents and the City. 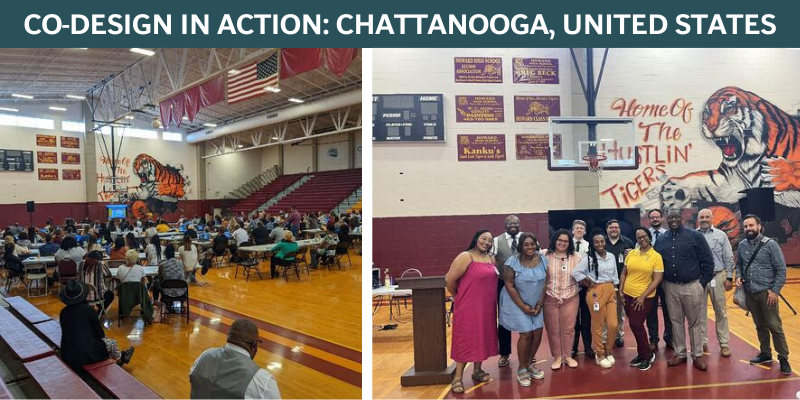 The team leaned on the strong, long-standing community relationships and brought their co-design sessions directly to integral community locations such as at summer camps and local schools. This technique proved effective in that the team was able to engage with 75 youth ranging from elementary, middle, and high school-aged youth by hosting 5 ideation sessions at Chattanooga summer community youth camp. To reach teachers, they hosted their co-design session at a local high school and saw tremendous success, with 160 public school teachers in attendance. 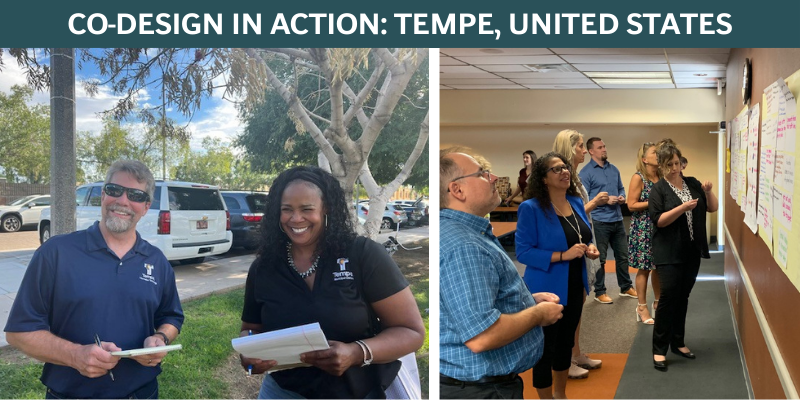 Tempe’s core team is working to investigate and reimagine their homeless prevention and intervention approaches. To ensure that they were co-creating solutions with those closest to the problem, ideation sessions were held at neighborhood parks during weekly service events for the unsheltered. Additionally, the team hosted ideation sessions with service providers and local business leaders.

By partnering with those closest to the problem, the team was able to generate over 300 ideas. Unhoused residents shared with the team the best forms of communications for reaching communities like their own could consist of using text messaging to inform about programs and resources and posting critical contact information at shelters, transitional housing locations, and on distributed water bottles By expanding ideation to involve the communities impacted by homelessness (unsheltered, service providers, business, and residents) the team is learning how to use design to create more accessible and effective prevention and interventions while building upon and adjusting their previously established programming. 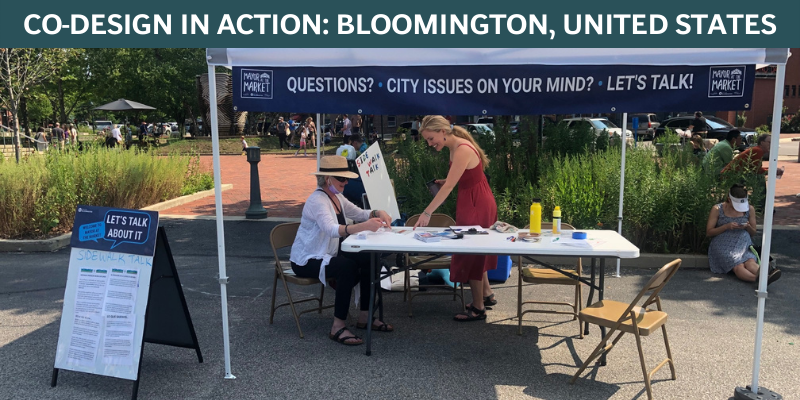 The City of Bloomington regularly holds “Meet the Mayor” events at a local farmers’ market to make the City accessible to residents. The Innovation Team decided to build on the already established momentum of these events to co-design ideas around sidewalk maintenance. The team used simple “how might we” questions - or prompts to help residents come up with creative solutions - ultimately co-designing over 50 ideas that could address the problem. The team included both English and Spanish versions of the prompts to build more accessibility and belonging. In addition, to increase engagement, the team encouraged people to create more ideas by rewarding participants with popsicles if they came up with 5 or more ideas!

For the Bloomington team, meeting residents where they're at meant taking advantage of community events that are already popular. The accessible engagement format helped folks quickly share their thoughts and proved that co-designing with residents can be low-lift sessions and still successful.

Adapting to the Needs of Residents

While we always try to build intentional and well-designed sessions, creating inclusive co-design requires flexibility and adaptability. Cities that can think on their feet and adapt their facilitation techniques to meet the moment’s demands go far in making their residents feel welcome. 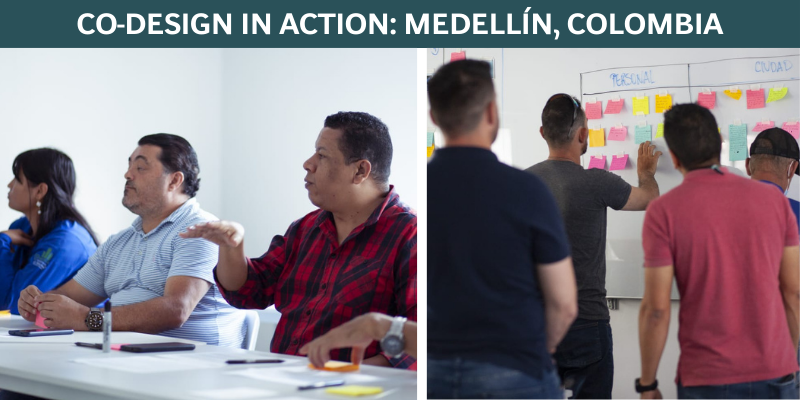 Medellín’s core team is working to address waste in public spaces. In hopes of gaining critical insight and creative ideas on how to address the issue of growing waste and improper disposal of waste, the team prioritized collaborating with a diverse set of stakeholders consisting of business leaders, community leaders, parents, youth, and formal and informal waste collectors.

While co-designing with formal and informal and waste collectors, the team learned that a few residents were illiterate and the traditional methods of pen and paper would not work for capturing their ideas. In the spirit of innovation, the team shifted to a conversational discussion-based style of ideation where they asked “How Might We?” questions to these residents and captured their ideas. As a result of quickly adapting in real-time, the team could successfully sit with residents and engage in conversations while taking notes on resident ideas shared orally. After the co-design sessions, Harry Marin, a communication advisor for the city of Medellín, said that facilitating the co-design process orally proved valuable because it challenged them to “move toward a permanent effort to translate technical terms to a more plain, simple language.” 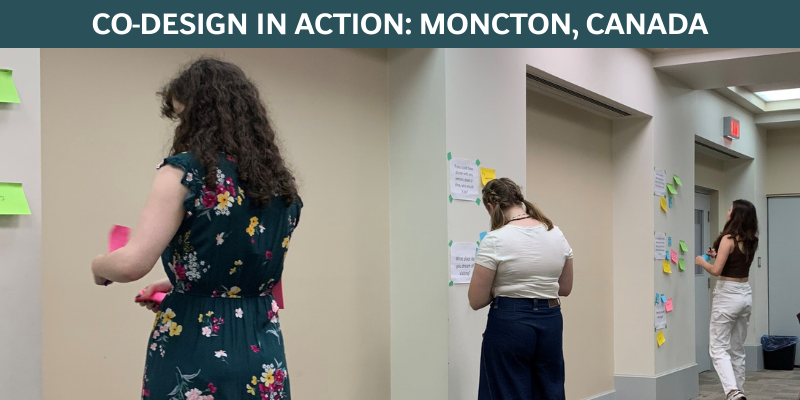 The Moncton core team is working on achieving net-zero emissions swiftly and effectively. As part of their research on the current understanding of net-zero emissions in Moncton, the team learned from local teachers that there was little emphasis on climate-related topics in schools – even though youth were viewed as key to the success of global warming interventions.

Once they uncovered this disconnect, they realized they needed to engage a key stakeholder group that they hadn’t worked with before: youth. To do this, they had to be creative in bringing local youth into the process in a way that is tailored to them. To properly engage youth, the team decided that an in-person session was needed versus a virtual one. More importantly, they conducted seven separate icebreaker prompts to ‘get to know’ the students before diving into the formal co-creation session. In particular, they asked light-hearted questions such as “How do you like your eggs?” and “What are you streaming right now?” which brought laughs and camaraderie early on in the experience, leading to more robust engagement later on.

In addition to adjusting their co-creation sessions to meet the youth population’s needs, wants, and attention spans, they also made this accessible in English and French (Moncton is the first bilingual city in Canada). This addition made everyone feel more comfortable sharing their ideas, regardless of their first tongues, because the facilitators could speak in both languages fluently and confidently.

Tapping into Play for Co-Design

Co-design requires creativity – leaning into collective imagination to generate solutions that can lead to better outcomes for all. In creating co-design sessions, some cities have opted to create playful environments that help make residents feel at ease and able to fully engage their imagination to develop solutions. These sessions can both lead to some pretty fun ideas, and create a positive interaction between residents and cities – leaving residents wanting to engage more in the long term. 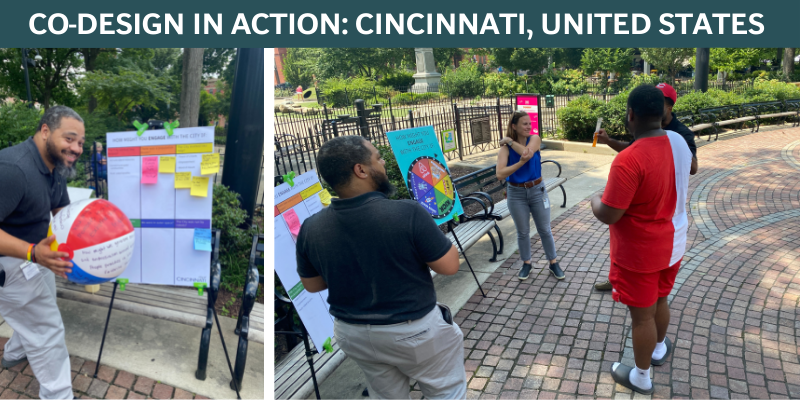 The Cincinnati team focused on strengthening community engagement between residents and the City. Instead of following strictly structured engagement sessions or traditional public forum styles, the team hosted a fun activity in the park. A few members of the team brought a beach ball labeled with prompting “How Might We” questions and asked residents to catch the ball and answer the first question they saw - such as ‘how might we make engagement feel like having a conversation with a neighbor?’. They also used a spinning wheel with creative future scenarios that pushed residents to think about potential engagement ideas. Residents loved the playful nature of the session and shared they would love to see more similar engagements in “fun spaces.” 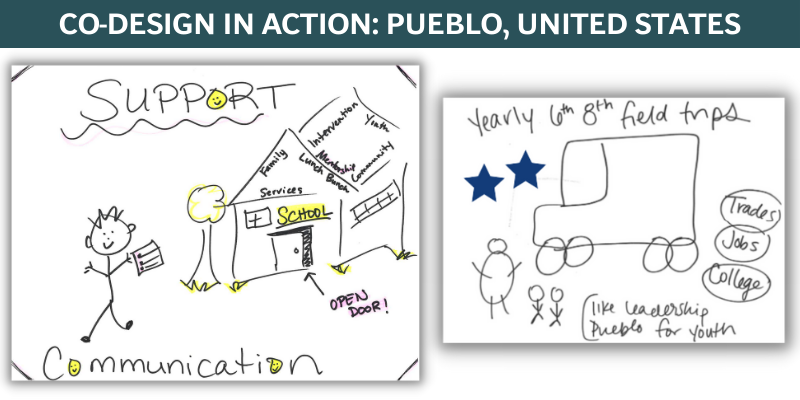 The Pueblo, Colorado team is focused on supporting middle schoolers to steer away from gang violence by providing alternative forms of engagement and investing in local communities.

To explore what impactful solutions could look, the Pueblo team worked with various groups -- from youth to school administrators to families -- to co-create new ideas. To tap into the ‘inner creative,’ the team had residents draw out what these ideas would look like to help visualize how their initiatives could change the community. Residents came up with over 100 different pictograms depicting their ideas and enjoyed using art as a medium to think about change.

Co-design practices are not “one-size-fits-all,” but the value of creating solutions with residents and communities is clear. When these sessions are designed well, cities can uncover hundreds of potentially transformative solutions that already have community-buy in. Beyond the specific solutions, co-design also fosters a stronger relationship between communities and the governments who serve them. We’ve learned that how a city meets its community in co-design is just as important as the co-design itself -- setting the stage to embrace values of collaboration, equity, and trust. As one participant puts it, co-designing is “democracy in practice.” 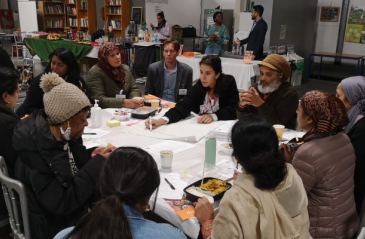