Companies seeking to innovate should not focus on the technology first, says @EddieACopeland

“I think if you work in the innovation field, you have to be naturally optimistic,” says Eddie Copeland. And optimism is certainly the impression you get from a few moments in his company.

Copeland - a former staffer in both Westminster and Congress - now leads government innovation work on behalf of Nesta, the innovation foundation - part thinktank, part do-tank - which may be British-based but is very much of global reach. Not content with merely researching today's challenges, they actively seek out partners both inside and outside government to test new approaches and ideas that can make a difference. Sounds fascinating - no wonder Copeland seems so at home.

“The challenge for the innovation community is producing results fast enough that wins hearts and minds,” he adds. “This is because often when public sector organisations are up against it - which they are financially and sometimes in terms of public support - the tendency might be to want to dig in and retrench to what they are already doing. So perhaps, on reflection, you have to be on the border between optimistic and pragmatic to work in this field.”

Copeland joined Nesta in January 2016. The former head of technology policy for the UK's Policy Exchange thinktank, he has authored five reports on government use of technology and data. From his perspective, one deep in the weeds of data and delivery, he believes that governments' willingness to innovate has undergone something of a conversion, one rooted in the reality of ever-diminishing budgets.

“When I first started looking at this area - about four years ago, just as we entered our era of austerity - there was still a focus from most public sector organisations on just trying to improve efficiency in what they were already doing,” he explains. “So it was about cutting out any spare fat, shedding staff when they were deemed nonessential, and salami-slicing back on the same business model. But what we have seen in the last 12 to18 months is an increasing number of organisations - particularly in local government - realising they need a Plan B. The scale of the funding challenge is making them realise that they need to think of some radically different ways of working.”

Copeland believes, however, that the funding issue - “English local authorities alone are facing something like a £10 billion shortfall by 2020” - is not the only reason that business as usual is no longer an option. The other, he adds, is governments' legitimacy - or lack of it. “There are increasing levels of public dissatisfaction and disengagement globally with the political process,” he points out. “People have attributed Brexit and the rise of Donald Trump to voters feeling fed up with the political establishment. And so we have also been looking at whether there are more meaningful ways to involve the public in political decision-making and issues affecting their communities.”

So, what is 'innovation' exactly?

One of the challenges Copeland and his team face is the fact that while “innovation” bestrides the public and private sectors, its prevalence does not mean there is a single definition. Instead, it means different things to different people and different organisations.

“At Nesta, we see it as being about bringing great ideas to life,” he says. “The problem I see time and time again, though, is that the tech industry creates a huge amount of hype about the latest thing, such as big data, the internet of things, blockchain or whatever it might be, and we go through endless hype cycles. The result is that people end up so focused on the technology that they bolt new technology onto the old ways of doing things.”

So what's the solution? Copeland argues that organisations should not focus on the technology first, but should instead consider what exactly they want it to do. “Technology is an amazing enabler of new things, but organisations should start with the question ‘how do you want to work?' and not think that this is something that can be outsourced or delegated to some IT experts,” he says. “You can't get yourself off the hook like that. What they need is to ask whether a fundamentally better operating model for delivering a particular service can be enabled by technology - rather than being driven by it.”

A good example of this, he adds, is the GM Connect programme, introduced and overseen by the Greater Manchester Combined Authority, and which brings together the data of 10 individual local authorities. “They used to act like a jigsaw that is never put together,” explains Copeland. “They had lots of different pieces of data, but no-one was seeing the bigger picture. But over the past couple of years, they have been systematic about joining up and analysing their data at a city region scale to improve outcomes on issues like vulnerable children in their area. A good example is how they have been joining up child truancy data to ensure that vulnerable families don't slip through the net.”

So that's what happens when systems, processes and people align to produce a genuine innovation with positive outcomes - but what lessons should be drawn when other attempts to do things differently produce less positive results? Copeland is at pains to stress that he understands why policymakers are risk-averse - “they're spending taxpayers' money, after all” - but goes on to say that there is a balance to be struck.

“What we would ask them to do is to take educated, measured risks and not just dive into poorly designed and poorly thought through programmes,” he observes. “Sometimes, programmes can be very well-meaning, but the way they are executed and communicated can set the whole agenda back, because they lose public confidence.”

Avoiding such pitfalls is clearly easier said than done, but nonetheless there are some important success stories out there. To illustrate his point, Copeland cites the Innovate to Save initiative, funded by the Welsh government, which aims to support new ideas that have the potential to generate cashable savings for Welsh public services and improve the quality of service delivery.

“There are risks to not trying new things and - given that the public sector, in some cases, faces the prospect of falling off a financial cliff if they keep doing things as they are - they have to find some radically different ways of working,” he points out.

“We can't stare out of a window and just theorise about what those new methods might look like - we have to experiment. With Innovate to Save, which is run in conjunction with Nesta and Cardiff University - frontline workers or third sector organisations can receive grant money to test their proposals. If these trial results are promising, they then receive loans to scale them up, which can be paid back from the savings that they make. It's the type of safe space for organisations to try experiments that we need more of.”

The success of such programmes underpins Copeland's optimistic disposition when it comes to government innovation. “We can't guarantee that new ideas will work, but it's down to organisations like Nesta to help de-risk that process as much as we can, so they have a fighting chance of innovating,” he concludes. “We're doing that, but there is always more to do.”

The task now is to ensure that successful innovations do not remain individual adornments on the public sector horizon, but instead form a chain of connected initiatives which help to foster new learning and new approaches for governments - both nationally and locally. A big job ahead, but one that Copeland and his colleagues are relishing.

From ‘Water’ to ‘Why’: New Orleans’ Resident Engagement Journey

What is 'community' and why is it important? 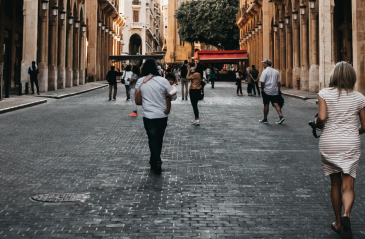