Social Capital: What, Why, and How we can use it as a tool for empowerment

'Social capital exists when relationships, built on trust, links & shared understanding, are acknowledged to have value to make change'

Right now, Black and allied voices are demanding justice and change from our communities, our systems, and our governments. The battle for racial justice and equality has not, is not, and will not be a short one. For generations, Black Americans have been hurt and devalued by systemic racism and white supremacy. To dismantle these systems, we must commit to change over the long haul.

CPI believes building social capital could be an important way for governments to address the past harms of racist policies and to build equitable, resilient communities in the long-term. If built intentionally, with an honest acknowledgement of past harms, and with communities centered as experts in the work, government and communities can create positive, equitable public good.

We make this recommendation after much internal evaluation and discussion of research, concluded in April 2020, on the existence and function of social capital as a lever for public change. Although this research did focus on racially diverse and historically excluded communities, it did not critically examine the unique challenges faced by Black Americans. As such, we want to emphasize that core to any social capital effort is understanding and empowering those who are most impacted. This means that social capital, and the process to build it, will look different in every state, city, ward, and even street.

Ultimately, we believe social capital, built in partnership with communities, can be a tool to serve and empower those who have been impacted by our country's history of institutional racism, inequity, and injustice.

Social Capital: It's more than who you know

So what exactly is social capital? Since popularized in Robert Putnam's Bowling Alone, the concept has taken on many forms. A quick Google search for “social capital” will produce dozens of pages of definitions from reputable .edu, .gov,  and .org sites. Suffice to say, the meaning of “social capital” is widely varied and (frankly) nebulous.

One of the more digestible definitions from the OECD states: “We can think of social capital as the links, shared values and understandings in society that enable individuals and groups to trust each other and so work together.”

Breaking this down further, social capital is about relationships, strengthened by three mutually reinforcing elements: 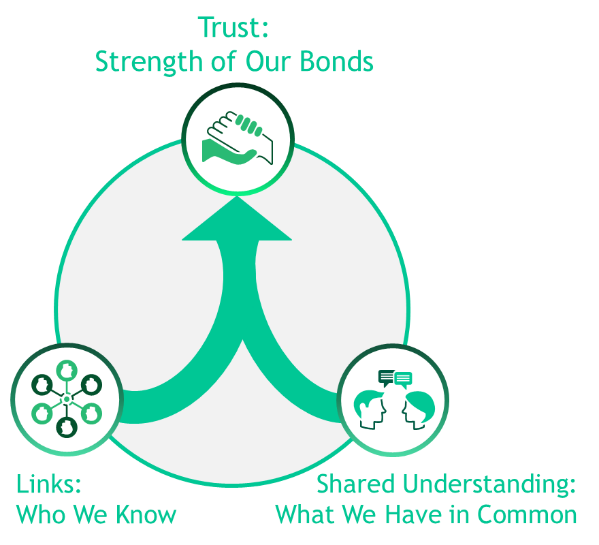 Social capital, then, exists when these relationships, built on trust and shared understanding, are acknowledged to have value and leveraged to make change.

While most examples of social capital cite relationships between people, communities can also leverage social capital within themselves and with their governments to achieve positive public outcomes. Massachusetts, for example, built social capital between government actors, such as public health entities and state leaders, and community actors, such as volunteers and community leaders, by coordinating medical services across the state. These relationships, built over time, played a critical role in the efficient distribution of the seasonal flu vaccine during the shortages of 2004-2005. When hit by a massive earthquake in 2011, communities with more shared norms and social ties in Japan's Tohoku region prevented additional loss of life from the subsequent tsunami, using the intervening 40 minutes to evacuate the elderly and warn their neighbors.

The good news: We can build social capital

By co-owning, co-creating, and co-leading initiatives specifically designed to build social capital, governments and communities can come together in pursuit of common goals.

Since 2011, New York City has used participatory budgeting to determine how to spend a portion of the city's budget. Anyone, from individual community members to organizations, can propose physical infrastructure improvements that “benefit the public, cost at least $50,000 and have a lifespan of at least 5 years.” The city vets the most viable options, which are then voted on by the constituents for implementation.

Through the initiative, residents take on leadership roles and engage with each other on community priorities to put forth and generate support for proposals. To encourage uptake, city representatives find innovative ways to engage their constituents in the process, including social media, community meetings, and using local gathering places like libraries and grocery stores as places to get the word out. City representatives acknowledge that what they've learned about their constituents through their outreach and proposals has helped align government efforts with city priorities, which, in turn, built trust among constituents who see their proposals taken up and their voices heard.

Despite its positive impacts, the participatory budgeting process was designed and initiated by government, rather than in partnership with communities, and therefore continues to struggle to generate greater community buy-in, with 1-5% of constituents across districts participating annually. This means it often does little to address existing inequities in political participation. So, while this is an important starting point, participatory budgeting is a somewhat imperfect tool for equitably building social capital.

City representatives acknowledge that what they've learned about their constituents through their outreach and proposals has helped align government efforts with city priorities, which, in turn, built trust among constituents who see their proposals taken up and their voices heard.

On the other hand, Louisville has taken a racial equity lens to address violence and build social capital. In 2012, Louisville convened the Violence Prevention Work Group, consisting of community, city, and business leaders, to develop strategies to reduce and prevent violence throughout Louisville. The group noted that historical disinvestment and racist policies such as redlining are one part of a complex, interconnected system that created the conditions for violence, and recommended a focus on equitable community building to address some of the root causes. In response, Louisville launched the Office of Safe and Healthy Neighborhoods (OSHN), which institutionalized the city's commitment to violence prevention with a historically informed lens. In 2015, OSHN initiated the One Love Louisville campaign to build capacity and community by allowing “every resident to realize that they have a stake in the well-being of our city”, directing resources to communities who have experienced economic harm at the hands of racist policies.

As part of this campaign, OSHN partnered with residents, faith and community-based organizations and businesses to design, implement, and disseminate a community-building strategy. OSHN creates opportunities for community members to design, own, and lead various programs related to neighborhood health and safety. Community members are encouraged to become Metro Mentors, who receive two hours paid off a week to help at-risk youth develop critical skills. Local businesses are encouraged to participate in SummerWorks and offer youth a summer position where they can further their professional development. One Love Louisville aims to address the historical disinvestment and racist policies that created circumstances that contribute to violence through this resource distribution.

These initiatives have generated trust and buy-in from community members that are typically marginalized from political processes. These relationships are a critical element to building and leveraging social capital, which One Love Louisville grows by recruiting additional participants from current participants' friends and families. It's important to note, however, that although the government and communities are optimistic about the work, direct impacts on violence reduction have yet to be measured.

These initiatives have generated trust and buy-in from community members that are typically marginalized from political processes.

The Dudley community in Boston, MA experienced significant disinvestment at the hands of racist policies. Dudley experienced decades of redlining, discriminatory lending practices, racist urban renewal plans, and plain neglect by the City of Boston. By the 1980s, Dudley was covered in vacant lots from frequent instances of arson and was the site of extensive illegal dumping of toxic waste. These practices were intended to force out residents who could afford to leave and allow landlords and developers to profit off the insurance payouts and discounted land prices for future development. In response, philanthropies, non-profits, community development corporations, and community members founded the Dudley Street Neighborhood Initiative (DSNI).

What started as a door knocking campaign to capture resident voices and design an inclusive redevelopment plan has, over the last 40 years, developed into a full-scale organizing coalition that builds social capital by creating space for residents to participate in decision-making processes.

DSNI leads development without displacement, provides training and education, and develops community leaders with an eye to promoting racial equity. The community buy-in generated by DSNI has tangible impacts on residents' quality of life; however, it is not without challenges. In its 40 years of existence, DSNI weathered many political upheavals in its working relationship with the City of Boston. Though the city is  incentivized to work with DSNI, it is not mandated to give DSNI, and therefore residents, a voice in the development of their neighborhood. So, while social capital is being built among communities (and, to a degree, with the city), there is still work to be done to establish the community as a true partner with the city of Boston.

Not a blueprint, but a guide

Ultimately, there is no blueprint for building social capital. As these cases show, each community has unique needs and a unique history of past harms that must be considered in the building of relationships between governments and communities.

However, initiatives that are co-owned with communities, take an asset-based approach, acknowledge and listen to communities as the experts in their needs and capabilities, and focus on equity, especially racial equity, can build social capital in a way that benefits communities and rebuilds trust in government.

If built intentionally, and collaboratively, social capital can be an important tool to better serve communities who have been silenced, underrepresented, and systemically harmed. 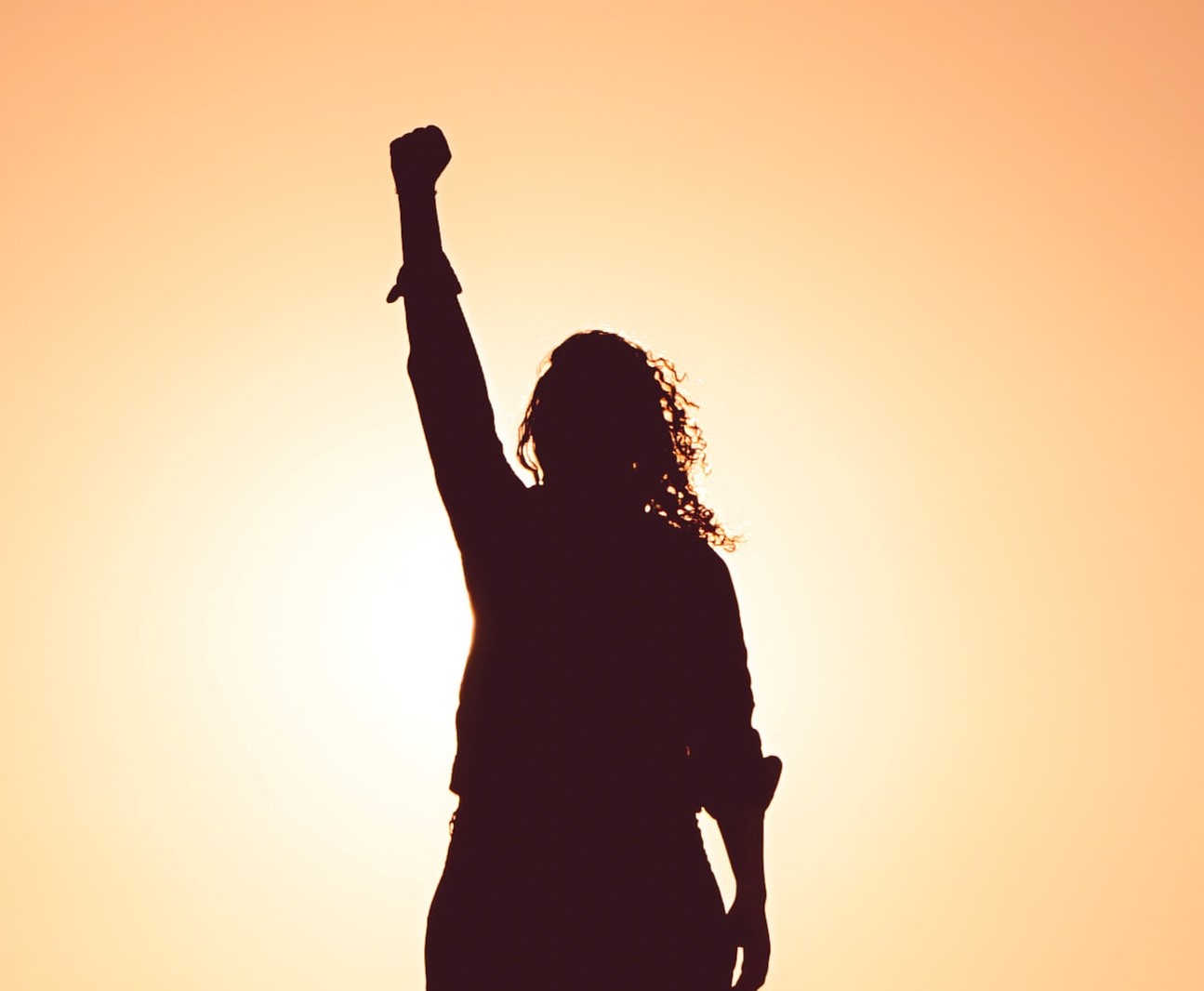 This research was conducted on behalf of CPI by Kathleen Addison, Katie Stenclik, and Katherine Williams, students at the Harvard Kennedy School, who interviewed local government representatives and community leaders to develop the corresponding case studies and recommendations for building social capital. You can access the full report here.