Azerbaijan wanted to make its administrative services, such as issuing passports and driving licences, more transparent. It adopted an e-government model that brought all such activities into a one-stop shop, ASAN. The services were made available online and citizens could also attend service centres in the capital, Baku, and other cities, or in the mobile offices that travelled throughout the country.

In order to enhance the efficiency and quality of services, such as issuing residence permits, driving licences, ID cards, child adoption certifications and customs declarations, a new e-service was launched by presidential decree on 13 July 2012: the Azerbaijani Service and Assessment Network (ASAN).

The anti-corruption element was addressed by redefining relations between state agencies and citizens, eradicating or minimising direct contact between them and, as a result, enhancing transparency and eliminating opportunities for corruption. The move towards greater efficiency was addressed by creating a one-stop shop for a wide range of state services. ASAN's objectives are set out on the State Agency for Public Service and Social Innovations:

As in many other countries, e-services are used to make interactions between government and civil society more efficient and transparent.

In 2011, the central Asian country of Azerbaijan was struggling with problems of inefficiency and corruption in the relations between state agencies and citizens. Acquiring an official document, such as a driving licence or a passport was a time-consuming process, and it often led to corrupt financial transactions. On a wider perspective, Azerbaijan stood at number 143 in the Transparency International Corruption Perception Index.

The published statistics about ASAN's use are as follows:

Although there is no absolute correlation between Azerbaijan's levels of corruption and the introduction of ASAN, the country has moved up 24 places in four years to 119th place in the Transparency International's 2015 Corruption Perceptions Index, with a modest increase in its “cleanness” score. [4]

The initiative was established on the initiative of the president of Azerbaijan, Ilham Aliyev. He is the key stakeholder. ASAN is run by a chairman, appointed at the discretion of the president. The main administrative stakeholder is the State Agency for Public Service and Social Innovations, which is responsible for ASAN and coordinates its functions with the ministries of justice, health, transport and others.

The EU cooperates with ASAN in some of its administrative functions. “Congratulating the Chairman [Inam Kerimov] for the obtaining of the ISO 9001:2008 certificate Mrs. Mard [Malena Mard, Head of Delegation, Ambassador of the European Union] emphasised that: ‘ASAN is a model for a successful public services provision that ... has been able to make a significant positive difference for many citizens of Azerbaijan. The EU is proud to have been among the first international partners to co-operate with ASAN...' The EU funded a project ... relating to the improvement of corporate, ISO and HRM standards[, which] was implemented from September 2013 to April 2014 and had a budget of about €300,000”. [5]

The president is strongly committed to the ASAN service centre and is the chairman of the State Agency for Public Service and Social Innovations, which was created by presidential decree.

The objectives were defined and clearly stated at the very outset (see Initiative above) and they have remained the same throughout. They are essentially qualitative and focus on the improvement on relations between public servants and citizens, with the guiding principles of “transparency, ethical behaviour and responsibility”.

There is evidence of similar one-stop shop models being implemented in other countries, but no evidence that the ASAN model drew specific aspect of its design from them... “The one-stop shop model – where citizens are able to receive a range of public services in a dedicated centre – has been introduced by countries such as the UK, Canada and Georgia to make service delivery more efficient. Azerbaijan has recently adopted a similar model, which is having a big impact on the way citizens access services.” [6]

ASAN was established under presidential decree (Decree of the President of the Republic of Azerbaijan No.685) and therefore has legal force. The importance of its activities to the government mean that it has the necessary financial backing and this has enabled it to recruit suitably skilled staff. “Successful human resource management has been integral ... The average age of people working in these centres is between 18 and 35, and more than half have experience of studying abroad.” [7]

At the lower level of management, the ASAN service centres “have been equipped with the right public servants with the right skills - they have a highly-motivated, flexible, diverse and skilled workforce which is capable of providing high-quality, personalised public services... Because all the payments in ASAN centres are made online, through the post office or pay-point kiosks, the quality and speed of services has been improved and services have become much more responsive and cost effective... The fact that there is no cash-flow in the centres also increases transparency and reduces the risk of corruption.” [10]

Customer satisfaction is measured on the basis of a certain set of yardsticks e.g., the number of citizens who are satisfied with the application form.

A ‘Citizen Satisfaction Survey' is carried out quarterly. “The main criteria considered in the calculation of satisfaction rate are the following:

Statistical data is collected on a daily basis and is then used for taking administrative decisions. “In addition, all the services provided by government agencies are being continuously monitored and evaluated.” [11]

The actors involved in the successful functioning of the ASAN service centres are the president of Azerbaijan, the State Agency of Public Service and Social Innovations, the ministries that cooperate with ASAN, such as the ministries of justice and of health, the volunteers and staff involved, and the members of the public who use the service.

“One of the positive outcomes of the network is that young volunteers aged from 17 to 25 are helping citizens who are incapable of filling in applications themselves.” [12] For those who cannot attend one of the seven ASAN centres, “the Agency developed a mobile service of cars and buses equipped with all the necessary technologies to provide the same services to all the Azerbaijani people”. [13] 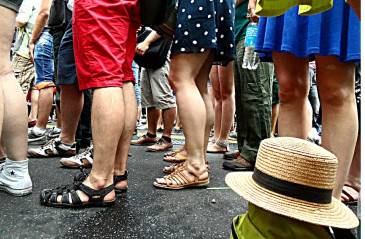