Whether updating the economic vision, or adopting new stance on foreign relations, the Lebanense gov need to be resilient for a new journey

Public trust is at the core of the relationship between government and its citizens. Not only does it enable policymaking through citizens' compliant behavioral responses, but also increases consumer and investor confidence for an ultimately more prosperous nation. However, public trust is facing challenges globally: even in the most developed countries, it is deteriorating and less than half of citizens trusted their government in 2019.

When multiple preventable disasters occur over an extended period of time in a given country, it only follows that citizens' public trust will be eroded, and Lebanon is a prime example of the latter. In 2019, polling already showed that less than a fifth of Lebanese citizens trusted their government institutions, likely due to decades of government corruption. Since then, Lebanon has witnessed a devastating economic and banking crisis during which the Lebanese pound devaluated by more than 80% and banks restricted dollar withdrawals despite past promises that the lira to dollar peg would remain unchanged. More recently, a humanitarian catastrophe unfolded when more than 2700 tons of ammonium nitrate exploded in the port of Beirut killing more than 100 individuals and leaving more than 300K homeless.

The events of the past year have only served to bring global attention to a legitimacy challenge that has been growing in Lebanon for some time. Having worked in civil society in Lebanon, I've seen firsthand the impact that deeply ingrained sectarianism has had on the ability of the public sector to meet the needs of citizens.

The Lebanese government institution has consistently proven itself unable to showcase and maintain good governance (as defined by UNESCAP) in any of the 8 characteristics highlighted. If Lebanon is to regain the trust of its citizens, it must display substantial change and strive to undo its wrongdoings. Whether the below framework can be achieved with the current constitution and political climate is unclear, but it is a roadmap to rekindling lost public trust and empowering an ambitious and deserving nation.

Drawing on CPI's vision for better government, the suggested actions below are drafted to create a stronger focus on the core values for a more effective and legitimate government: humility, openness, empathy, authenticity and trust. It is only after displaying these values that the Lebanese government can, perhaps, look to mend its severed relationship with its citizens.

Just like a company rebrands itself when it goes through a scandal or crisis, so too should the Lebanese government. Fortunately for Lebanese citizens, the government cannot rely on simple name or logo changes. The only way to truly start anew is to change from within, completely.

Forward-looking stability will showcase government-driven resilience to pick itself up and dust itself off for a new journey.

Three types of impactful changes can be envisioned: constitutional change, change in political representatives and a change of vision.

Change tends to cascade from the top-down but then truly emerges from the bottom-up. The current sectarian system induces the exact opposite effect: to think locally for one's own sectarian benefits and to then attempt to act systemically which often leads to political deadlock and decision-making failure. If constitutional change is required to enable state-wide decision-making, then government representatives should be channeling their full might into it. In most recent events, the only actors who were thinking systemically and acting locally were all but government.

It is difficult to avoid the word “war” in “warlord”. It is also unsurprising that current major Lebanese political figures are so named, given that most are descendants of sectarian political dynasties. A government-driven push to avoid a cult of personality-like worshipping of these figures should be a priority, not only to transition from a tribal warlord-led state to a public servant-focused nation but also to demonstrate intent to bridge internal socioeconomic and cultural boundaries rather than reinforce them through sect-specific approaches.

Seek out strengths and build on them

Lebanon's competitive advantages are many: from resources such as potential for water abundance and a skilled current and future workforce (page 360) to a strong sectoral presence: agriculture, industry, tourism, financial services and more. However, there is a need to focus on the overarching theme of stability, in particular risk of doing business (page 190), which is crucial to enabling any type of business activity. Few are those willing to conduct business in a country where political, humanitarian and economic disasters are imminent. The Lebanese government should look to minimize risk of doing business, especially given that most of the risk is government-induced, to enable our competitive advantages to flourish.

Optimize for learning rather than control

If the system is to build resilience and learn for the future, it must act in whatever way possible, even if experimental, to ensure continuous learning and adaptivity to unforeseen circumstances.

It seems as though Lebanon has been awaiting the arrival of a knight in shining armor to take control and fix the broken system for more than a decade now, and today more than ever. Although a recent event ignited hope in ongoing foreign aid, it is no reason for public institutions to remain complacent. If the system is to build resilience and learn for the future, it must act in whatever way possible, even if experimental, to ensure continuous learning and adaptivity to unforeseen circumstances.

Ensure a prosperous future for all

If the technocratic government was not able to avoid economic and humanitarian disaster, then must it follow that Lebanon is destined for failure? Which individuals are best placed to act if not the experts themselves? The answer is not clear cut. Perhaps the technocrats were indeed best placed to act if Lebanon's governance system had not debilitated their ability to create tangible outcomes. What is clear is that Lebanon cannot sustain more damage and that it urgently needs empowered leaders with specific characteristics for good governance: enough authority to act on the most pressing issues, enough expertise to take the right decisions, enough purpose to drive long-lasting impact, enough openness to build trust with citizens, enough humility to recognize failures, enough courage to stay a difficult course, enough empathy to recognize the outcries of a suffering population and enough self-awareness to fear them.

What is clear is that Lebanon cannot sustain more damage and that it urgently needs empowered leaders with specific characteristics for good governance.

Champion the voices of those who are heard the least

With every crisis comes an opportunity to reset and build back better. Just as many governments were able to reconcile short-term stimulus measures with plans for long-term economic and sustainable growth as a response to the Great Recession, so too should the Lebanese government act in similar fashion. On top of political and economic change, now is the time for Lebanon to reflect for the long-term on its most pressing social issues and remedy its ties with the marginalized and the oppressed as well as those disproportionately affected by current circumstances, to ensure their access to an inclusive, fair and prosperous future within a united nation.

Learning from Tragedy: A Lesson on the Value of Earned Legitimacy in Government 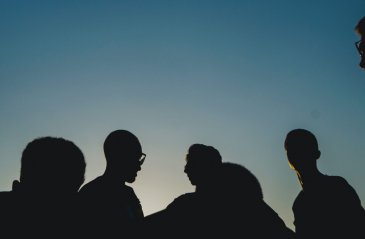