Overcoming Segregation in American Education, One Step at a Time

Segregation is the basis of so much of America's ills. Learn how one teacher experienced a summer that could help provide a solution.

"These divisions in our youth harden as we grow older, creating split communities that cannot meaningfully engage with one another." Learn how one group of students showed a way of bridging America's divide

Interested in bringing people from very different walks of life together? Learn how one group of students and educators helped uncover valuable insights in overcoming our differences

The divisions across America have come to dominate nearly every single aspect of our national life. Yet for all the numerous proposals and articles addressing the topic, one word remains curiously under-used: segregation. Despite this, segregation is the root cause of so much of our national difficulties, and it is alive and well today.

These divisions in our youth harden as we grow older, creating split communities that cannot meaningfully engage with one another.

Over my career in education and working with youth, I have seen the realities of segregation among students. Students go to schools where they only encounter one race, live in neighborhoods with one race, and experience the majority of their lives around one race - segregation is the issue. These divisions in our youth harden as we grow older, creating split communities that cannot meaningfully engage with one another. As we look to the future, we must come together to make our democracy work. I believe this begins with addressing the realities of racism, segregation, and views of “the other” among students. I was lucky enough to witness firsthand an amazing lesson in how to do just that.

In late 2020, I had the pleasure of working with a diverse group of students who came together through Mikva Challenge to create social change through civic engagement. There were 17 youths representing different communities throughout Southern California, with different races, ages, genders, income levels, and immigration statuses. The impact this program and their own hard work had on their sense of self, power, and social responsibility to others was tremendous. Mikva challenge provides several key lessons not only applicable to individual educators, but also provides inspiration and guidance to policymakers and administrators seeking to tackle the divisions in our society at a larger level. Through these lessons, we overcame the difficulty of establishing a strong team that had never met outside of the virtual space and ended with a tight-knit group fiercely committed to civics.

The first lesson learned is to give students structured control and input over the curriculum and community, after using “dyads” to break down the barriers between students. During the first weeks, we focused on team building and working together to establish community guidelines rooted in student’s ideas for creating a productive and safe environment to learn. Every meeting would include a reading of our community rules and guidelines such as “step up, step back” and “if you find that you disagree with someone, use the phrase ‘what did you mean by that’ to allow them to clarify their point.” By repeating these guidelines that students had created, we established a community where students really nurtured what was most important. Just as important, we used the concept of “dyads” to help our team control how they introduced themselves to each other. A dyad was where students had a grid of questions ranging from “what’s your favorite sport” to “which branch of government would you rather be in” to “what do you believe it means to be civically engaged in your community.” Students took turns answering the questions of their choice and this way they had both a structure by which to relate to their new peers, but also freedom within that structure to choose how they would approach the process. Through focusing on the dyads, we were able to allow students to connect with others who were often extremely different from themselves, breaking through on a small level the barriers that segregation had laid in place. 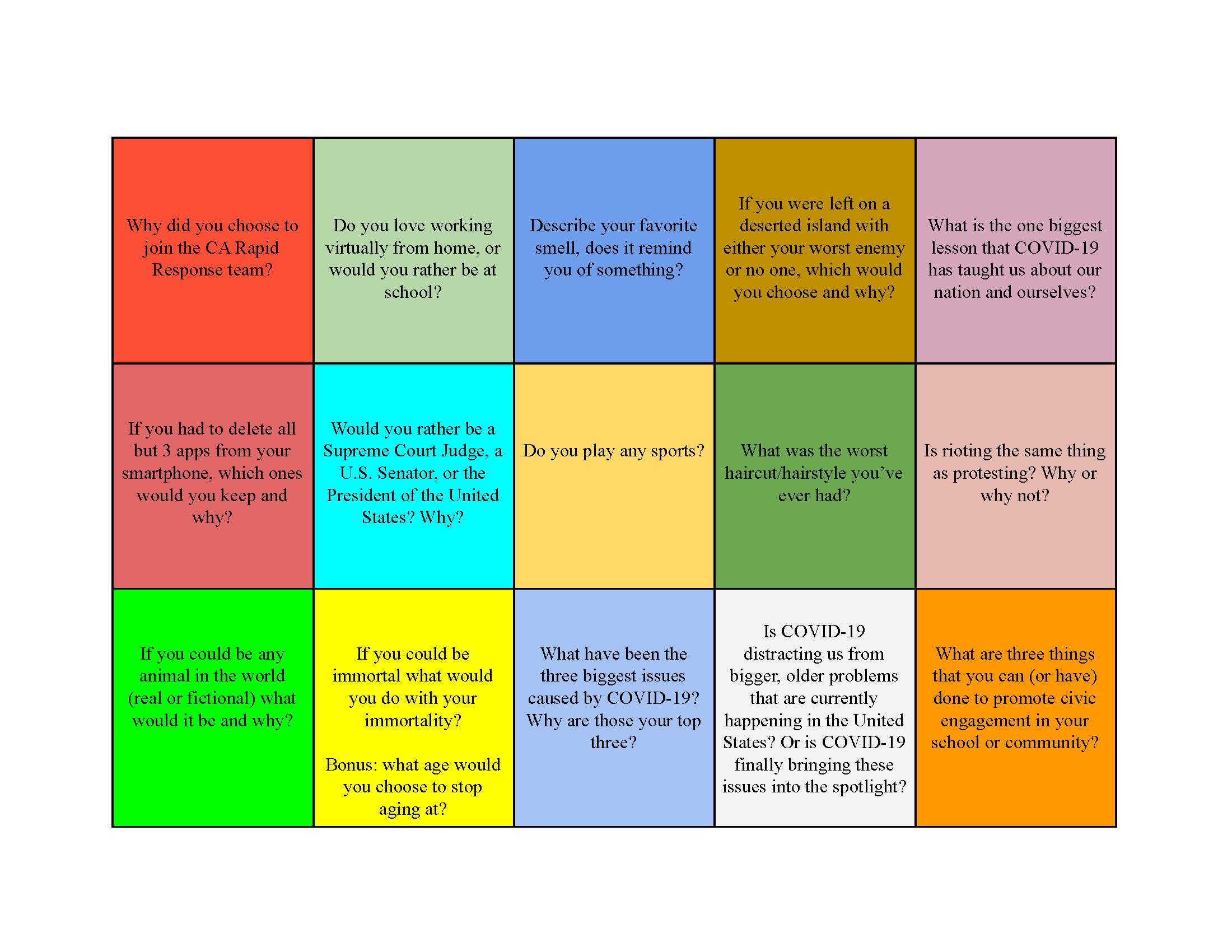 An example of the dyads used during the Mikva Challenge

This leads us to our second lesson learned: use civic engagement content to teach “traditional,” “core” concepts like math, grammar, and computer skills. Our civic engagement curriculum was designed to equip students with the language and structure they needed to explore complex issues such as “racial disparities in health care access during the pandemic.” We used various techniques, such as the roots cause tree, 1-minute “soapbox speeches,” and, most importantly, a heavily emphasized final project that the youth collectively worked towards - in this case, a town hall. Through these lessons, they worked on scholastic skills like reading, writing, networking, and qualitative/quantitative research while also learning how to talk about issues in their communities and propose solutions to members of Congress, donors, and educators from all over the country as they prepared for their town hall. This collective civic effort united the students, effectively teaching them academic skills while also cementing their bonds as a group.

Through these lessons, we overcame the difficulty of establishing a strong team that had never met outside of the virtual space and ended with a tight-knit group fiercely committed to civics.

For educators and non-educators alike who would like to become part of the movement to bring civic engagement education to our youth, there are more ways to get involved. One aforementioned organization that is already doing amazing work to bring civic engagement-based opportunities to youth across the nation is Mikva Challenge. The curriculums being introduced by Mikva nationwide teach civic engagement to young people through “regular” classes like history, reading, and eventually grammar and math. Furthermore, city, state, and federal officials can begin pushing for more investment around the expansion of resources available to civic engagement curriculums in schools. That is why Congressional representatives Rosa DeLauro (D-CT) and Tom Cole (R-OK), along with former Congressman David Bonier, and Senators Coon and Cornyn, have all introduced a bipartisan bill to fund civic education at $1 billion annually. Efforts like this should be encouraged and rewarded. The divisions caused by segregation were not created overnight, and it will take time and effort to bridge them. But after watching 17 students manage to do what so many adults cannot, I know that we as a nation have a chance. We need to take it.